“Above and Beyond” is playing on TCM on Friday May 10. (USA) 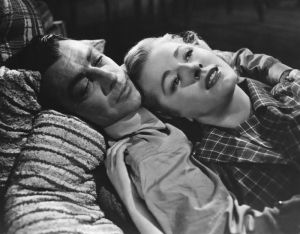 Directed by Melvin Frank and Norman Panama, who also wrote the screenplay (and share three Best Writing Oscar nominations between them), this historical drama was adapted from Beirne Lay Jr.’s story, for which Lay Jr. received a Best Writing, Motion Picture Story Academy Award nomination; Hugo Friedhofer’s Score was also nominated. Similar to The Begining of the End, this film tells the story behind the dropping of the first atomic bomb on Hiroshima during World War II. However, instead of the focus being on the development of the bomb itself, this one is told from the perspective of the Air Force Colonel in charge of the mission which executed the task itself. Robert Taylor plays Colonel Paul Tibbets, pilot of the Enola Gay, the B-29 bomber which flew the mission and delivered the payload. Eleanor Parker plays Tibbets’s wife Lucy, and much of the story focuses on the affect this mission had on Tibbets and his family.  Review by Classic Film Guide.com

I became a Robert Taylor fan at the age of 15 when his TV show, "The Detectives" premiered. My mother wanted to watch it because she remembered Mr. Taylor from the thirties. I took one look and that was it. I spent the rest of my high school career watching Robert Taylor movies on late night TV, buying photos of him, making scrapbooks and being a typical teenager. College, marriage and career intervened. I remember being sad when Mr. Taylor died. I mailed two huge scrapbooks to Ursula Thiess. I hope she got them. Time passed, retirement, moving to Florida. Then in 2012 my husband Fred pointed that there were two Robert Taylor movies that evening on Turner Classic Movies--"Ivanhoe" and "Quentin Durward." I watched both and it happened all over again. I started this blog both for fans and for people who didn't know about Robert Taylor. As the blog passes 200,000 views I'm delighted that so many people have come by and hope it will help preserve the legacy of this fine actor and equally good man.
View all posts by giraffe44 →
This entry was posted in Films and tagged Above and Beyond, actor, aircraft, atomic bomb, aviation, B-29, colonel paul tibbets, Eleanor Parker, Enola Gay, entertainment, Hiroshima, Robert Taylor, secret mission, World War II. Bookmark the permalink.