The Golden Age
by Robert Taylor

No matter how old one is, the Golden Age of Hollywood was long ago. I hope I’m not talking tired because I refer to change. Many of the major people are still working today but they have all been transformed.

If today is still the twentieth century, the Hollywood of the 1930”s and early 1940’s was 200 years ago. In a sense it was baroque. There was a style of living and making motion pictures which no longer exists. It has been coldly modernized into something very factual, very efficient—and, I’m afraid, not very much fun.

Robert Taylor and Vivien Leigh on the set of “Waterloo Bridge,” 1940.

The creative and artistic management and the fabulous “showmen” still exist—there are a few—but they’re largely working for themselves on a one-picture-every-two-years basis.

Their great talent isn’t directed a “program” of pictures—toward the management and betterment of a studio.

For some of us who were fortunate enough to have been a part of the Golden Age, however, the memory lingers on.

In my own case, I was part of the MGM “Stable.” We called Metro the campus—and even the seasons were semesters. Camaraderie was shared at work and at play, up and down the line, and the aspect of jealousy was virtually nonexistent—at least among the male stars.

There was nothing predictable, except perhaps sunrises and L.B. Mayer—and not necessarily in that order.

Gable was legend, he set the style and the pace. His cars, especially, drove the lesser

lights, like myself, mad with envy. I remember two very distinctly—one a green Deusenberg convertible and the other a Darrin Packard Twelve which Carole Lombard had had built for him.

We associated with each other in those days for fun—not just publicity. The Trocadero was the clubhouse—and on Sunday nights, some outstanding wit was master of ceremonies, introducing for the first time on the West Coast such people as Martha Raye or Joe E. Lewis. Owner Billy Wilkerson would wander around accepting compliments on the wonderful food, wonderful entertainment and wonderful service. And it was just that—wonderful! 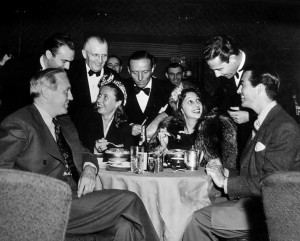 People pop up in my memory. Many of them are gone. Wallace Beery was special. Lionel Barrymore had forgotten more about acting than most of us would ever know. Yet he was always—and strangely—shy–about voicing his opinions. However, if you asked him he could sketch a lesson on portrayal that was complete and perfect in a matter of seconds.

I found him asleep in his chair—the ashes of his cigarette all over his chest, the butt extinguished by his own lips. He was a very tired man—and unwell—but none of us ever thought that such a marvelous warm moment would ever leave us.

And good old Gary Cooper–”Coop” to just about everyone, whether they knew him or not. In my way of thinking, Coop was the handsomest man—certainly one of the two or three best actors—ever to honor the ranks of the motion picture business. And one of the most beautiful and talented ladies ever to grace a motion picture screen—Vivien Leigh.

The closeness and the pace never did create the terrible dose of imitation current today. Perhaps television is at fault—perhaps not, I honestly don’t know. But at least in that long ago decade we had both poles. 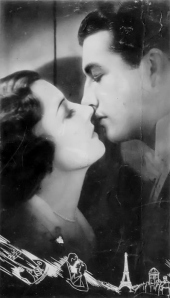 I recall making Magnificent Obsession with Irene Dunne. John Stahl was directing. He approached the responsibility of a director in very much the same manner as I assume an atomic physicist approaches the handling of a bomb—with infinite care and painstaking slowness. It was not uncommon for us to do 30, 40, 50 takes on a relatively simple scene. At the time I was doing retakes on one of the Broadway Melodies and Woody Van Dyke was directing. Woody cut as he shot. He used his camera as though it were a six-shooter and he was the fastest gun in Hollywood. Actors rarely got more than one take on any scene, then the camera was moved rapidly to another set-up. It was, of course, going from the sublime to the ridiculous, but it seemed normal. It was the age.

It ended in the late 1940’s with the unexplained and seemingly premeditated murder of glamour. Television, taxes, actors pricing themselves to the skies—are all part causes, but not the definite ones. I don’t know really.

I can’t explain the demise. Perhaps if someone would correctly explain the phenomenon of rock ‘n’ roll, Beatle haircuts and the beatnik wardrobe, we will start to understand. In any case, it was 200 years ago. 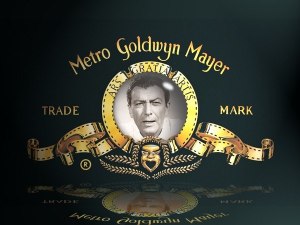 I became a Robert Taylor fan at the age of 15 when his TV show, "The Detectives" premiered. My mother wanted to watch it because she remembered Mr. Taylor from the thirties. I took one look and that was it. I spent the rest of my high school career watching Robert Taylor movies on late night TV, buying photos of him, making scrapbooks and being a typical teenager. College, marriage and career intervened. I remember being sad when Mr. Taylor died. I mailed two huge scrapbooks to Ursula Thiess. I hope she got them. Time passed, retirement, moving to Florida. Then in 2012 my husband Fred pointed that there were two Robert Taylor movies that evening on Turner Classic Movies--"Ivanhoe" and "Quentin Durward." I watched both and it happened all over again. I started this blog both for fans and for people who didn't know about Robert Taylor. As the blog passes 200,000 views I'm delighted that so many people have come by and hope it will help preserve the legacy of this fine actor and equally good man.
View all posts by giraffe44 →
This entry was posted in Biography and tagged 1930s, A Yank at Oxford, acting, actor, baroque, camaraderie, celebrities, Clark Gable, Coop, Deusenberg, entertainment, Gary Cooper, glamor, Golden Era, handsome, hollywood, Irene Dunne, John Stahl, lionel barrymore, Louis B. Mayer, Magnificent Obsession, MGM stable, Robert Taylor, Trocadero, Variety Magazine, Vivien Leigh, Walace Beery, Waterloo Bridge, Woody van Dyke. Bookmark the permalink.