The forecourt at Grauman’s Chinese Theater.

One of the most prestigious honors for a Hollywood movie star is to have his or her hand and footprints immortalized in cement in the forecourt of Grauman’s Chinese theater.  The tradition began in1927 with Norma Talmadge.  Legend has it that she accidentally walked into some wet cement but this is untrue.  Today there are roughly 175 imprinted slabs with very little space left.  Because of this, most of the prints being made today will be used at other theaters. 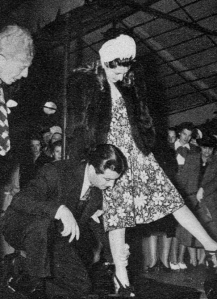 Until his death in 1950, Sid Grauman made all decisions concerning which stars would be allowed to make their imprints. While a significant criteria was predicted staying power, most decisions were made for promotional reasons. Stars who had new releases playing at the Chinese Theater tended to get invited to make their marks on its forecourt. After his death, a committee chosen by each subsequent owner/s of the theater would make the decision. (Everything2.com)

Bob and Barbara just after making their hand prints.

The overseer of the ceremonies was master mason Jean W. Klossner. Descended from a long line of French masons, he used a special chemical formula for the concrete which he guarded jealously even unto his death. It allowed the concrete to be pliable for up to twenty hours so that mistakes could be corrected if the star felt necessary, and once set the concrete proved extremely durable. [Because of the secret formula]  Grauman and the managers that followed him were forced to retain Klossner until the mason’s death in 1965. All non-Klossner squares always cracked. He never shared the secret of his concrete’s concoction, but those that followed him could approximate it easily enough with modern synthesized chemicals. (Everything2.com)

Robert Taylor and Barbara Stanwyck left their prints on June 11, 1941.  Along with both of their hand and footprints, the block includes their signatures and the inscription “To Sid, we love you.”

Despite Klossner’s secret formula, the Taylor-Stanwyck block had deteriorated seriously by the 1980s, mostly where fans had stepped in the stars’  footprints.  Grauman’s invited Stanwyck to place her prints in a new cement slab, with a view to replacing the crumbling old one. She refused, as to do so would mean that Taylor’s name would be omitted from the forecourt.   (http://david-paris.blogspot.com)  This does her a lot of credit.

The deterioration, however, continued and in 2002 the Taylor-Stanwyck square was removed from the forecourt in pieces. It was painstakingly restored and returned to its place in 2003.

The restored slab being lowered into place.

I became a Robert Taylor fan at the age of 15 when his TV show, "The Detectives" premiered. My mother wanted to watch it because she remembered Mr. Taylor from the thirties. I took one look and that was it. I spent the rest of my high school career watching Robert Taylor movies on late night TV, buying photos of him, making scrapbooks and being a typical teenager. College, marriage and career intervened. I remember being sad when Mr. Taylor died. I mailed two huge scrapbooks to Ursula Thiess. I hope she got them. Time passed, retirement, moving to Florida. Then in 2012 my husband Fred pointed that there were two Robert Taylor movies that evening on Turner Classic Movies--"Ivanhoe" and "Quentin Durward." I watched both and it happened all over again. I started this blog both for fans and for people who didn't know about Robert Taylor. As the blog passes 200,000 views I'm delighted that so many people have come by and hope it will help preserve the legacy of this fine actor and equally good man.
View all posts by giraffe44 →
This entry was posted in Biography and tagged 1941, Barbara Stanwyck, celebrities, cement, deterioration, entertainment, footprints handprints, Grauman's Chinese Theater, hand prints, hollywood, hollywood movie star, inscription, Klossner, master mason, movie stars, norma talmadge, prestigious honors, restoration, Robert Taylor, Sid Grauman, slab, wet cement. Bookmark the permalink.