The following excerpts are from Me and Bogie by Armand Deutsch (New York, G.P. Putnam’s Sons, 1991).  This book is available from Amazon.com and other online retailers.

In 1943 the United States Navy had approximately eighty thousand officers. I was one. Robert Taylor, certifiable world-class MGM film star, was another. The chance of his playing an important role in my life was too miniscule to calculate. Even the sophisticated computers that would come on stream decades later would spit it out.

We beat the odds. I was assigned to Navy Public Relations and specifically to “The Navy Hour,” a radio program devoted to dramatizing naval heroes. There was a constant search for big names to host to the show, and they came up with a winner in Lieutenant Junior Grade Robert Taylor, who was stationed at a stateside Navy base. The program originated in Washington. It was my job to shepherd him through the process, which is where I first met him. He was quiet, pleasant, and reserved, all qualities that went unnoticed because he was so breathtakingly handsome.

He did his stint and we flew to New York in a Navy plane. He was scheduled to do a second program in a week and seemed unreasonably despondent about spending he intervening time in a New York hotel. I said, innocently enough, “There must be worse things than being Robert Taylor and having a free week in New York City.” “Not for me,” he said firmly. “I can’t leave my room without being mobbed. I’m a prisoner, plain and simple. I don’t have any friends in New York and my only telephone calls will be to room service.” I told him I had a Park Avenue apartment and suggested that he stay with me, where no room service calls would be required. He said quietly that he did not want to impose, but I gave him my telephone number just in case and we made plans to meet the following week for another trek to Washington.

Taylor and Stanwyck being mobbed in Venice, 1950.

Three days later he called and said he would like to take me up on my offer if it was still open. I assured him it was and quickly acquired a lonesome movie star border. He could not have been easier or more appreciative. He was disappointed that his wife, Barbara Stanwyck, could not join him for that week, but she was filming. To my disappointment, he was totally uncommunicative about his glamorous Hollywood life. When we did try to go beyond the confines of the apartment I realized his dilemma. He had already made, among other outstanding films, Magnificent Obsession with Irene Dunne and been dubbed by Time as “the most admired matinee idol since the late Rudolph Valentino.” Anywhere he went he was instantly surrounded and, although he knew it went with the territory, he disliked it.

Grant, in describing himself, said it best. “There was no such thing as Cary Grant until I invented him.” There certainly was no such thing as a Robert Taylor until he was invented. Spangler Arlington Brugh, not Robert Taylor, was born in 1911 in Nebraska. His roots were deep and his values were set long before his good looks came to the attention of talent scouts and he made the transition to Robert Taylor, California resident and film star. The transplantation never really took with Bob. He found his life seductive and remunerative, but he could never quite get rid of the feeling that wearing costumes and makeup was not a proper way for a man to earn a living. It was too bad since he simply was incapable of getting enjoyment from achieving a very high pinnacle of success and being the idol of untold millions of people. 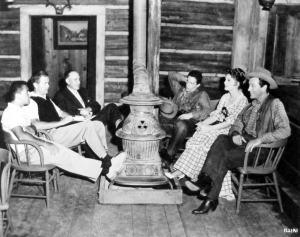 Bob did one more “Navy Hour” program and then returned to his base. He had been the pleasantest of house guests, and my stock with the elevator operators, doormen, and other tenants of the building shot sky-high.

Amazingly, soon after the war ended and I was back at my Wall Street job I received a call from none other than Bob Taylor in California. He and his wife were coming to New York. How did I feel about theatre and dinner afterward? I said I’d love it. He sent me my ticket and we met at the theatre. Luckily I went early. The arrival of my hosts produced massive aisle-jamming that was contained only by the rise of the curtain.

Getting away from the theatre was far more hazardous than any experience I had in the Navy. With the help of a policeman and the doorman, we were stuffed into their limo. Before police reinforcements arrived in sufficient number to let the driver inch his way out of this unholy mess, the densely packed crowd rocked the car and hammered the windows to the point where I truly feared for our safety. It would have been a glamorous way to go, gut I preferred a postponement. 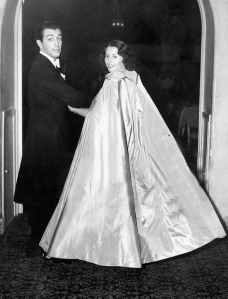 The glamorous Taylors on an evening out, 1930’s.

We had supper in the Cub Room at the city’s posh Stork Club. The patrons were used to celebrities and, for the most part, did not approach the table. But the ogling at these two people was truly Major League. The Stork Club was a favorite hangout of mine. I was always well treated, but after that evening I received the same obsequious attention that I now commanded at my apartment.

Stanwyck, she of the sexy voice and sultry looks, was far more outgoing than Bob. Her only interest in the evening, after all, was helping her husband reciprocate for hospitality. I loved her salty style and gave her an A-plus for effort. We parted with the time-honored. “Let’s do this again” dialogue. 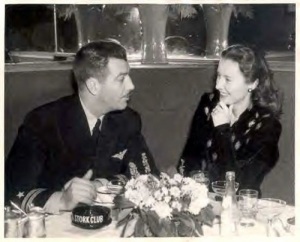 I became a Robert Taylor fan at the age of 15 when his TV show, "The Detectives" premiered. My mother wanted to watch it because she remembered Mr. Taylor from the thirties. I took one look and that was it. I spent the rest of my high school career watching Robert Taylor movies on late night TV, buying photos of him, making scrapbooks and being a typical teenager. College, marriage and career intervened. I remember being sad when Mr. Taylor died. I mailed two huge scrapbooks to Ursula Thiess. I hope she got them. Time passed, retirement, moving to Florida. Then in 2012 my husband Fred pointed that there were two Robert Taylor movies that evening on Turner Classic Movies--"Ivanhoe" and "Quentin Durward." I watched both and it happened all over again. I started this blog both for fans and for people who didn't know about Robert Taylor. As the blog passes 200,000 views I'm delighted that so many people have come by and hope it will help preserve the legacy of this fine actor and equally good man.
View all posts by giraffe44 →
This entry was posted in Biography and tagged acting, actor, Armand Deutsch, Barbara Stanwyck, celebrities, current-events, entertainment, glamor, handsome, hollywood, house guest, Magnificent Obsession, matinee idol, Me and Bogie, MGM, movie stars, Navy Hour, Robert Taylor, Stork Club, values. Bookmark the permalink.