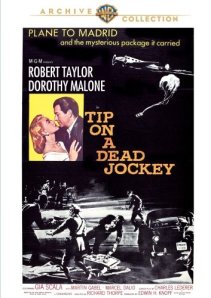 TIP ON A DEAD JOCKEY (1957) From war vet preachment yarn to domestic drama, from fateful Noir to aviation actioneer, this post Korean War suspenser leads us down a series of narrative rabbit holes that careen through reversals and twists which ultimately land us at 20,000 feet. Gia Scala and Dorothy Malone join up with Robert Taylor as the damaged goods hero in this tale of international intrigue and back-alley crime. Directed by frequent Taylor collaborator Richard Thorpe (Knights of the Round Table). 16×9 Widescreen. Newly Remastered 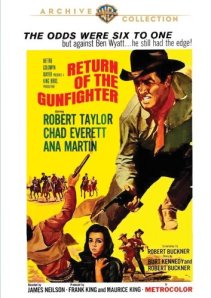 RETURN OF THE GUNFIGHTER (1967) Few actors saddled up with the power, conviction and style as Robert Taylor. After moving away from his “perfect profile” rep with 1941’s Billy the Kid, Taylor brought grit and grace to gunfighters throughout his prolific career before bowing out of the genre with this powerhouse pistol polemic. Taylor plays the title returner, Ben Wyatt, getting out of Yuma after a five year stay on a kangaroo conviction. Heading down to Mexico to aid a rancher compadre, he arrives to find his friend murdered. Although he yearns for a path of peace, the gunfighter hits the vengeance trail with his friend’s daughter (Ana Martin) and a young drifter (Chad Everett) — none of whom realize the drifter has a strong familial connection to the felons. Directed by James Neilson (Flareup). 16×9 Widescreen. Newly Remastered

I became a Robert Taylor fan at the age of 15 when his TV show, "The Detectives" premiered. My mother wanted to watch it because she remembered Mr. Taylor from the thirties. I took one look and that was it. I spent the rest of my high school career watching Robert Taylor movies on late night TV, buying photos of him, making scrapbooks and being a typical teenager. College, marriage and career intervened. I remember being sad when Mr. Taylor died. I mailed two huge scrapbooks to Ursula Thiess. I hope she got them. Time passed, retirement, moving to Florida. Then in 2012 my husband Fred pointed that there were two Robert Taylor movies that evening on Turner Classic Movies--"Ivanhoe" and "Quentin Durward." I watched both and it happened all over again. I started this blog both for fans and for people who didn't know about Robert Taylor. As the blog passes 200,000 views I'm delighted that so many people have come by and hope it will help preserve the legacy of this fine actor and equally good man.
View all posts by giraffe44 →
This entry was posted in Films and tagged actor, Ana Martin, Chad Everett, Dorothy Malone, entertainment, film noir, flying, Gia Scala, Jack Lord, MGM, movie stars, Return of the Gunfighter, Robert Taylor, Tip on a Dead Jockey, westerns. Bookmark the permalink.