Simplicity, Sincerity and Honesty (and Alfalfa)

Hollywood–Robert Taylor is something of a problem child to his handlers. They believe he will be the biggest name in pictures within five years–if they don’t pull a boner. And boners are so easy. They run thus:

1-Make him the great lover and men are irritated.
2-Make him perfectly beautiful and people begin to giggle at him.
3-Make him a tough guy and “pash notes” begin to dwindle from his mail.
4-Make him dramatic and you can’t find enough substantial plays.
5-Give him high comedy and about 75 per cent of the customers can’t keep up with it.
6-Put him in low comedy and the masses pass him by as a buffoon.

So what to do with Robert Taylor? You suggest to his handlers that you’d like to ask Mr. Taylor himself. They take you to the “Three Comrades” set where he is warming up to kiss Margaret Sullavan in the wedding scene. For 20 minutes these two handsome youngsters kiss each other so as to have it just right for the 50 seconds it will run on the screen.

This talk about movie stars not giving it the old try when they kiss is a lot of tosh. He keeps knocking her hat off and she keeps hugging his collar out of line. The director patiently encourages the high degree of umph they display, but insists they refrain from mussing each other. They repeat and repeat until finally the camera nabs them as they should be; her hat stays put (but perilous), his shirt looks tidy, yet they are putting out all the fervor of two kids in a rumble seat.

Miss Sullavan scampers into her dressing room and Mr. Taylor, for no particular reason, suddenly knocks together the heads of Franchot Tone and Robert Young. They calmly sock him in the stomach.

“Ask him about everything but Barbara Stanwyck or hair on his chest,” the guide whispers. “He’s getting tired of those two questions. He’d close up like a clam.”

Here he is. Looks like an earnest little boy. An exceedingly good looking and likable guy, husky and hard, but a little boy bewildered at having so many people interested in him. 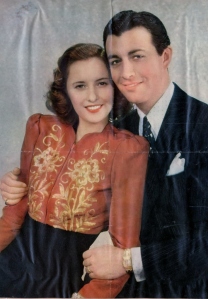 Q.-Where do you go from here in radio?
A.-Search me.

Q.-What’s all this talk about your changing from heavy lover to he-man in future pictures?
A.-You know as much about it as I do.

Q.-How could I?
A.-I don’t pick my pictures. The company does. They tell me what I’m to play and I do what I can.

Q.–Aren’t you consulted?
A.-Suppose I am. I’m no producer. If they want me to be a Bull Montana I’ve got to try. If they say be a swooning Romeo I have to take it. I don’t make the decisions. I wouldn’t know how.

Q.-Aren’t you Bob Taylor?
A.-To me, I am. To you maybe I’m not. All I know is I am Bob Taylor, a guy with a job in the movies. I read in the film magazines about Robert Taylor, and he’s altogether another person. I never know what he has done or has said or is about to do until I read about him. I don’t know him. When I read some of that maudlin stuff written about him, I feel I wouldn’t want to know him.

Q.-This Bob Taylor, what does he do or say?
A.-He lives on an alfalfa ranch in San Fernando Valley, 30 miles from here. He gets up at 6, eats, drives to work, does what he’s told from 9 to 6 then drives home. He goes to bed at 9. He doesn’t say anything that anybody would care about.

Q.-What does Bob Taylor do then?
A.-He stands around looking at his alfalfa and pretend he’s working the farm.

Q.-Does he ever do any partying or go to Santa Anita?
A.-Partying? Ask any fellow who’s trying to get along how much partying he can stand. I’ve been to the track a few times. They’re into me for four bucks.

Q.-Do you think we’re getting any place with this gabbing?
A.-No. There isn’t any place to get that I see.

Q.-Does it matter?
A.-Yes it matters. It matters a lot to me. I don’t like to sound like a lump. I ought to have a lot of quips to hand out so people would think I’m a great guy. But I’m just myself. I’ve got a job and I’ve got some alfalfa. Now I ask you, how can any reader work up a glow over that?

Oddly enough, he obviously meant just that. His eyebrows puckered and he was so sincere it must have hurt. Here was a boy whose salary in a week exceeds the sum most men make in two years; his mail is handled in bins; and we had seen the police escort which was needed to shove him through the mob between his car and the stage door for his radio appearance.

Robert Taylor’s handlers may continue worrying about possible boners they might pull with him. But it would be a whale of a boner to submerge this boy who stands neck-deep in simplicity, sincerity and honesty.

Imagine reducing the world of Robert Taylor to “a job and some alfalfa.”

I became a Robert Taylor fan at the age of 15 when his TV show, "The Detectives" premiered. My mother wanted to watch it because she remembered Mr. Taylor from the thirties. I took one look and that was it. I spent the rest of my high school career watching Robert Taylor movies on late night TV, buying photos of him, making scrapbooks and being a typical teenager. College, marriage and career intervened. I remember being sad when Mr. Taylor died. I mailed two huge scrapbooks to Ursula Thiess. I hope she got them. Time passed, retirement, moving to Florida. Then in 2012 my husband Fred pointed that there were two Robert Taylor movies that evening on Turner Classic Movies--"Ivanhoe" and "Quentin Durward." I watched both and it happened all over again. I started this blog both for fans and for people who didn't know about Robert Taylor. As the blog passes 200,000 views I'm delighted that so many people have come by and hope it will help preserve the legacy of this fine actor and equally good man.
View all posts by giraffe44 →
This entry was posted in Biography and tagged 1930s, acting, actor, alfalfa, Barbara Stanwyck, celebrities, chest hair, entertainment, glamor, Golden Era, handsome, intensity, kissing, Margaret Sullavan, matinee idol, MGM, movie stars, racetrack, radio, Robert Taylor, Three Comrades. Bookmark the permalink.

2 Responses to Simplicity, Sincerity and Honesty (and Alfalfa)