The ways of Hollywood are inscrutable. They discover a young guy who is so handsome the hearts of the dolls give a twit! and turn over and play dead and they realize that he is bound to be the romantic center of the universe while his vogue lasts. So, how about a good matinee-idol name for him? Arlington Brough…..How about that? Something elegant like that out of an Elinor Glyn novel. The girls would be nuts about it.

But with all its faults Hollywood is not that stupid. It realizes that a face like that combined with a name like that would be just too much. And besides it happens to be the bird’s real name…..Arlington Brough. Arlington Brough, formerly of Beatrice, Nebraska and Pomona College, California. Which is why he is now known as Robert Taylor, a gent of such heart-busting capacities that when he came east last spring the dames on Broadway practically tore him into little strips.

The insanity of the audience is one way of testing a star’s popularity but an even better way is to watch the reaction of the lady stars in the studio. Very practical about such things, are the ladies.

Hollywood pays off on success, they reason. If a picture makes a billion bucks, everybody gets a raise. So-o-o, if a young gent like Taylor stars annoying the husbands of the world and customers begin climbing in through theater transoms for fear of missing him, the lady stars want to be on that band wagon. It’s always possible to argue that Irene Dunne or Joan Crawford or Greta Garbo or Janet Gaynor really drew all that business.

Taylor is the first to tell you that he had very little to do with it. What he really thought he wanted to be was a psychiatrist. His father had been a doctor and the psychiatric field didn’t seem overcrowded. The young man had been educated primarily as a musician and was sawing away with some grace on a cello at Pomona when he took up dramatics. “A very fair cello,” insists Taylor with some asperity, when faced with the accusation.

At home by the fire, mid thirties.

As a youngster he had put in a lot of good baseball hours practicing the piano but by grammar-school time had given that up for the banjo and saxophone. He led the school orchestra and aroused the interest of B.O. Osborn, he superintendent, who went to some trouble to convince Arlington that the cello was the instrument for a gentleman.

At high school he ran the 100 and 200 dashes on the track team and was a swell orator. He won the city, county, district and finally the state championship at Wesleyan University. His piece was The Position of the Public School teachers in Life. The teachers all liked it.

Mr. Taylor loved farming and always said he could easily leave Hollywood for farming or ranching. This is ca. 1936.

He went to Doane College, Nebraska, and there was under the musical guidance of Herbert E. Gray. When Herbert Gray got an offer to teach at Pomona College in California, Taylor went along with him. Just thought he might as well. He played in the orchestra and for the first time went in for dramatics.

“You,” they said to him, “you with the looks. You ought to be acting.”

He appeared in college productions of M’lord, the Duke; Camille; and The Importance of Being Ernest–everybody accepting the deed as right for a cello player but no deaths occurred from excitement. It was when Ben Piazza of M-G-M saw him as Captain Stanhope in Journey’s End that his Hollywood chance came. Piazza didn’t waste much time.

“Come on, come on,” he said as if it were illegal for anybody to turn down a Hollywood opportunity. “Sign here.”

It wasn’t much of a contract, calling for thirty-five dollars a week to start, working with Oliver Hinsdell at the M-G-M acting school.

“I turned out to be the Pomona College mugger,” Taylor admits. “I mugged with my shoulders, with my eyes. I twisted my mouth. I couldn’t keep my head still as a spoke lines. I did everything as if I were playing with a fly on my nose…..Well, I didn’t get anywhere. So I said to myself, ‘Oh , what the hell,’ and went back to Pomona and finished out the year. After that I got thinking about it and wrote M-G-M asking them if they wanted me back. For six weeks I didn’t get an answer. So I went down there one day to see Piazza, who was then the casting director, and he said if Hinsdell says okay, okay. So I went over to Hinsdell and he said okay…..at the same money, thirty five a week. It was three months before I even got a screen test.” 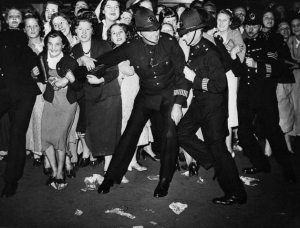 He got the lead in a short and then went into Society Doctor, which made him. The day after the preview, cards flowed into M-G-M asking who was he handsome lad playing the second lead. After that he was the romantic interest in Broadway and The Magnificent Obsession and Small Town Girl. Still later he became the heart bumper of the hemispheres. He played with Loretta Young in Private Number, with Barbara Stanwyck in His Brother’s Wife, with Joan Crawford in Gorgeous Hussy and was scheduled for the part of Armand in Camille with Greta Garbo, the girls being aware of the state of the world.

As a husband, all I can say about the young man is that just as soon as I am President of the United States he goes back to Pomona College and stays there. One peep out of him and it’s Beatrice, Nebraska again.

The Gorgeous Hussy, 1936. The costume was recently sold at auction.

I became a Robert Taylor fan at the age of 15 when his TV show, "The Detectives" premiered. My mother wanted to watch it because she remembered Mr. Taylor from the thirties. I took one look and that was it. I spent the rest of my high school career watching Robert Taylor movies on late night TV, buying photos of him, making scrapbooks and being a typical teenager. College, marriage and career intervened. I remember being sad when Mr. Taylor died. I mailed two huge scrapbooks to Ursula Thiess. I hope she got them. Time passed, retirement, moving to Florida. Then in 2012 my husband Fred pointed that there were two Robert Taylor movies that evening on Turner Classic Movies--"Ivanhoe" and "Quentin Durward." I watched both and it happened all over again. I started this blog both for fans and for people who didn't know about Robert Taylor. As the blog passes 200,000 views I'm delighted that so many people have come by and hope it will help preserve the legacy of this fine actor and equally good man.
View all posts by giraffe44 →
Gallery | This entry was posted in Biography and tagged 1930s, actor, celebrities, elegance, entertainment, evening clothes, Garbon cello, glamor, Golden Era, handsome, matinee idol, MGM, movie stars, Nebraska, Pomona College, Robert Taylor. Bookmark the permalink.