From the Beginning Robert Taylor Was Special

Millions of girls who take their romance by proxy have chosen Robert Taylor for their boy friend. They may have beaux of their own, but the magnet of this good-looking young man’s personality draws them to the super shrines we call cinemas. They come to watch that brilliant smile of his, to admire his six feet of manliness, to chuckle at his effervescent sense of humor—and to apply it all to the credit of the more plebeian young men sitting by their sides in the half-light. There are other young film actors who, to a lesser degree, exercise the same influence, but Taylor is most certainly the brightest of the most recently discovered stars.

One of the things I discussed when I was in Hollywood was the question of new stars. Who are the people who are to replace the really big personalities of the screen? Film fame fades rapidly, and at the moment there are not more than a dozen men and women who have such solidly entrenched positions that one could guarantee they will be worth their present value in a couple of years’ time.

Taylor sky-rocketed to stardom, and is still going up. Yet not so long ago he nearly tore up his contract. At leas, he was so shy and nervous about himself, so dissatisfied and uncertain about his future, that he asked to be released from Metro-Goldwyn-Mayer. Fortunately for him and for the film fans, Mr. Louis B. Mayer, the head of Metro-Goldwyn-Mayer, has been in the business a long time, and knows a potential star when he sees one. So instead of allowing the young man to convince himself that he was not a film actor and never would be, Mr. Mayer talked to him in a fatherly way. In fact, he appointed himself Taylor’s fairy godfather, advised him to have patience, encouraged him, and generally acted as his counselor-in-chief. So Bob stayed. Now he’s glad of it.

His confidence grew gradually and with it his stability but he is still terribly shy. Perhaps “shy” is not the exact word. His state of mind towards his professional ability is, I think, really a cross between shyness and a nice modesty. “I still want to dive under a chair every time I see myself on the screen,” he told me. Can you imagine a good looking chap like Robert Taylor feeling like that about himself? But that is how he does feel. Give him a horse or a bathing costume by the sea and he’ll be happy. But if you would wish to see him really embarrassed, show him himself on the screen. 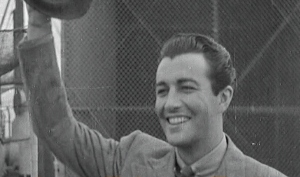 Robert Taylor arriving in London on his first trip to Europe, 1937.

Had it not been for a fortunate production of “Journey’s End,” this most promising young actor might have hidden his talent under an operating mask. For he intended to be a doctor, like his father. I think he would have made a very good doctor, because there is something about him that puts you immediately at your ease; a sort of a natural charm, born of the fact, perhaps, that he studies psychology in his spare time and knows something about his fellows.

He was at Pomona College, California, studying medicine when the school dramatic club decided to produce R.C. Sherriff’s play, and offered Taylor a part in it. He had taken roles in other college theatricals, but on this occasion a talent “scout” from MGM happened to be present. Before the final curtain fell, the embryo doctor had a film contract offered him. He accepted it. But, in a sense, he is still a heart specialist.

I don’t know what the theater did to me to to prevent me from going on with my medical studies, but I certainly stopped them,” he told me. “I finished my term at college, and for a year I went to school every day from nine to five at the MGM studios. During that time I never so much as saw a camera. I was being what they called ‘groomed’ and learning something about film acting. Then, one day, when I was completely fed up with it all, a studio messenger handed me an envelope. I had been given a minor part in a picture. Boy! Did I leap for the ceiling!” It is just the enthusiastic sort of thing he would do. With a charming frankness that is part of his essential personality, this young actor confessed that he was not much good on the picture.

To tell you the truth,” he said, “I was scared stiff. Even though I had been to ‘school’ for a year, I had not found my studio legs. It was at this time he asked to be released from his contract. Only a comparatively brief time has passed since then, but he has learned much. He has acquired a polish and an ability to suggest self-confidence even if he does not possess it yet.

Taylor has a keen sense of humor and a likeable personality. One of the most attractive things about him is that he is a mixture of boyish enthusiasm and a seriously studious turn of mind. He has a large library of books dealing with his pet subject, psychology, but at the same time he has a passion for collecting colored sweaters! He has more than 50 of them. What is the psychological explanation of that, Mr. Taylor?

To meet and talk with him is a refreshing experience. He is very obviously intelligent, but has a somewhat deferential, tentative manner that is very attractive. For instance, he admitted to me that for months after he started his film career he was so perplexed that he used to go home and sit down to ask himself seriously whether he should try to assume the pose of a seasoned actor, or to confess frankly that he was a bewildered young fellow trying to get along.

It must have been a worrying period and one can sympathize with him. But most young men who have climbed to the prominence he has attained would not admit having had such a feeling. He will also tell you that his rise has been due to phenomenal luck. Good fortune may have played a part, but his success has been due to hard work and an ability to project his real self through the camera lenses so that you may enjoy him on the screen.

It is true that he might not have been born with such fine looks, such height, or a well-proportioned body. But without working hard he could not have made use of them in the way he has. That he has had something of a struggle is clear from the little confessions he made when I was talking to him, but as soon as he told of a difficult time, he added quickly: “But I haven’t suffered much that I can remember, if you except the time I had my tonsils out. I’ve never trudged wearily from studio to studio looking for work. Perhaps I haven’t lived long enough for such things to happen to me. You cannot help liking a fellow who talks like that.

But Robert Taylor, I feel certain, has nothing to fear. He takes his work seriously. But he doesn’t take himself too seriously. To follow his steady success, you have only to think over the pictures in which he has appeared and the sequence of them. In each his acting has improved. He has acquired more and more poise and polish. His best performance, I thought, was on “Magnificent Obsession,” but he has added something to his value as an actor with “Secret Interlude,” his latest. I do not think he has ever had a bad notice from the critics on either side of the Atlantic. As a matter of fact, he is, a bit of a nuisance to people who have to review films.

There is only a limited number of appropriate adjectives with which to appreciate his work, and Taylor has already had most of them used on him already.

I became a Robert Taylor fan at the age of 15 when his TV show, "The Detectives" premiered. My mother wanted to watch it because she remembered Mr. Taylor from the thirties. I took one look and that was it. I spent the rest of my high school career watching Robert Taylor movies on late night TV, buying photos of him, making scrapbooks and being a typical teenager. College, marriage and career intervened. I remember being sad when Mr. Taylor died. I mailed two huge scrapbooks to Ursula Thiess. I hope she got them. Time passed, retirement, moving to Florida. Then in 2012 my husband Fred pointed that there were two Robert Taylor movies that evening on Turner Classic Movies--"Ivanhoe" and "Quentin Durward." I watched both and it happened all over again. I started this blog both for fans and for people who didn't know about Robert Taylor. As the blog passes 200,000 views I'm delighted that so many people have come by and hope it will help preserve the legacy of this fine actor and equally good man.
View all posts by giraffe44 →
Gallery | This entry was posted in Biography and tagged 1930s, 1937, acting, actor, brilliance, celebrities, fame, fans, glamor, Golden Era, handsome, handsomeness, humor, insecurity, inteligence, Louis B. Mayer, Magnificent Obsession, matinee idol, MGM, Packard, psychology, shyness, struggles. Bookmark the permalink.