Steven Kenet is a patient in the county insane asylum.

High Wall is a departure for Robert Taylor. In the 30’s he portrayed mostly handsome society boys. In 1941 he toughened up his image with Johnny Eager. This is an entirely different path. The lead character, Steven Kenet, has returned from a job flying freight in Asia after his service in WW II. He’s eager to see his wife and displeased to find out she has a job. Kenet is even more displeased when he discovers she is having an affair with her boss. To complicate matters, he has a brain injury and is suffering blackouts and other symptoms. Seeing his wife in her lover’s apartment triggers rage and violence. The wife is dead and Kenet is the only suspect. He confesses and is committed to a mental institution for psychiatric evaluation. The unique thing about the film to me is Taylor’s ability to play vulnerability. Kenet is neither a pretty boy nor a villain. He is a man in torment. Taylor uses his shoulders beautifully to portray hopelessness. 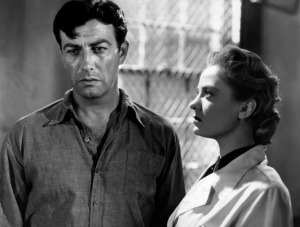 They droop in the scenes where the character is locked in solitary confinement. After his operation they are straight. The confusion on his face when he’s offered an opportunity to see his son at the hospital is masterful as he passes through a range of emotions moving from delight to doubt to anger to confusion. There is a remarkable sequence in which Kenet is dragged off after attacking a visitor. Taylor’s body positions change constantly–this is hardly the “wooden” acting for which he is so often condemned. Another great sequence is his walk up the stairs at the end to see his son. Kenet’s face radiates joy. The camera work is stylish and the chiaroscuro is masterful. This movie was apparently not well received in its time probably because it isn’t the “Robert Taylor” people expected and it is largely forgotten now. It deserves to be remembered.

Dr. Lorrison tries to get through to Steven Kenet. He’s not interested. 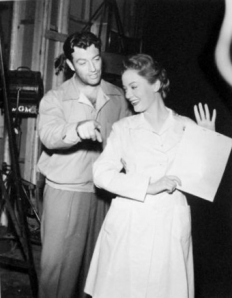 Give me that script.

The original caption to this photo: Doubly terrific……Taylor and Totter, Robert and Audrey, that is, are a doubly terrific combination teamed together for the first time in Metro-Goldwyn-Mayer’s “High Wall,” an exciting and unusual mystery picture directed by Curtis Bernhardt. It marks Taylor’s second post-war picture, and Audrey’s jump to screen stardom. Robert Lord produced, with Herbert Marshall also starred.

When Taylor fluffed a line, however, Totter hid her script from his view. “Just forget it,” she said, “you have too many lines in this picture anyway, leave me some.”

I became a Robert Taylor fan at the age of 15 when his TV show, "The Detectives" premiered. My mother wanted to watch it because she remembered Mr. Taylor from the thirties. I took one look and that was it. I spent the rest of my high school career watching Robert Taylor movies on late night TV, buying photos of him, making scrapbooks and being a typical teenager. College, marriage and career intervened. I remember being sad when Mr. Taylor died. I mailed two huge scrapbooks to Ursula Thiess. I hope she got them. Time passed, retirement, moving to Florida. Then in 2012 my husband Fred pointed that there were two Robert Taylor movies that evening on Turner Classic Movies--"Ivanhoe" and "Quentin Durward." I watched both and it happened all over again. I started this blog both for fans and for people who didn't know about Robert Taylor. As the blog passes 200,000 views I'm delighted that so many people have come by and hope it will help preserve the legacy of this fine actor and equally good man.
View all posts by giraffe44 →
This entry was posted in Films and tagged acting, actor, asylum, asylum. murder, Audrey Totter, celebrities, Curtis Bernhardt, drama, entertainment, glamor, Golden Era, handsome, Herbert Marshall, High Wall, hollywood, hospital, hypnosis, matinee idol, MGM, movie stars, murder, mystery, psychiatry, Robert Taylor, romance, sodium pentathol. Bookmark the permalink.