Robert Taylor had a life-long affair with things that go fast.  Cars, bikes, roller coasters and eventually airplanes satisfied his need for speed.  He and Clark Gable shared a love for motorcycles and according to Jane Ellen Wayne in “Stanwyck” pages 105-106:

Nothing was too fast for the two of them (Taylor and Gable).  If Barbara (Stanwyck) wanted Bob on the ground, he’d stay there–on a motorcycle with Clark cycling at top speed beside him.  Keenan Wynn and Gary Cooper were usually not far behind.

Louis B. Mayer was furious.  They were too reckless, he said,taking out their frustrations

by tearing up the roads and everything else in the way.

……..In her efforts, when she could find the time, Barbara nagged Taylor, pleading with him to “behave himself.”  Wasn’t it rather childish risking his life on the roads and in the air?  What was the purpose?  Defying life is a childish game, she tried to convince him. Was he running to or from something?  But why?  If Cooper was frustrated over his love life and Gable was devastated because of Lombard’s death, what was Bob’s reason for trying to destroy himself?  Her protests went unheeded.

MGM finally stepped in and demanded Gable sell his motorcycle. 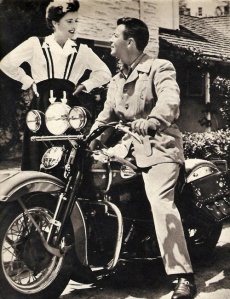 Barbara was torn between having her husband in danger away from home or in danger near home.  He had calmed down on his motorcycle since MGM gave him warning so Barbara, in motherly fashion, bought him a more expensive one.

The pictures show Taylor and Stanwyck in a photo op.  She didn’t ride but she liked the idea of pretending she shared Taylor’s outdoor interests.

The second Taylor family each had their own motorcycles, carefully chosen for size, and did ride them on their 113 acre ranch in Mandeville Canyon.

I became a Robert Taylor fan at the age of 15 when his TV show, "The Detectives" premiered. My mother wanted to watch it because she remembered Mr. Taylor from the thirties. I took one look and that was it. I spent the rest of my high school career watching Robert Taylor movies on late night TV, buying photos of him, making scrapbooks and being a typical teenager. College, marriage and career intervened. I remember being sad when Mr. Taylor died. I mailed two huge scrapbooks to Ursula Thiess. I hope she got them. Time passed, retirement, moving to Florida. Then in 2012 my husband Fred pointed that there were two Robert Taylor movies that evening on Turner Classic Movies--"Ivanhoe" and "Quentin Durward." I watched both and it happened all over again. I started this blog both for fans and for people who didn't know about Robert Taylor. As the blog passes 200,000 views I'm delighted that so many people have come by and hope it will help preserve the legacy of this fine actor and equally good man.
View all posts by giraffe44 →
This entry was posted in Biography and tagged acting, actor, adventure, Barbara Stanwyck, celebrities, children, Clark Gable, danger, family, gentleman, glamor, Golden Era, handsome, hollywood, Louis B. Mayer, matinee idol, MGM, motorcycles, movie stars, speed, Ursula Thiess. Bookmark the permalink.