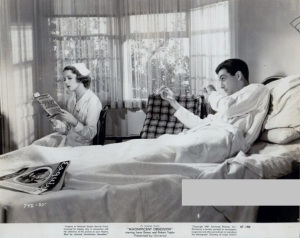 I just got my copy of the Criterion Collection’s two DVD set of Magnificent Obsession, containing both the 1935 and 1954 versions.  I had watched the Taylor version previously on the internet and the picture and sound quality were awful.  There were obvious gaps, as in when a person reacts to something that hasn’t happened.  So it was with some trepidation that I inserted my new disc into my laptop.  It is unbelievably good.  The picture is startlingly clear and detailed.  The sound is still not perfect but is worlds better than the other version.  Some themes were clear that hadn’t been before, for instance that Bobby Merrick is suicidal before his meeting with Randolph.  I say this based on his comments when he and Masterson are parked outside the cemetery.  Bobby says something about lying down under a blanket of grass and being at peace.  He is later shown at Randolph’s studio posed as an effigy on a bier.  Randolph’s intervention, I believe, literally saves his life.

Granted, some of the plot devices of this film are pretty hard to swallow, especially the timeline, but the fine acting, beautiful photography and top notch production values make it a pleasure.  I haven’t watched the 1954 version but the stills of people in bathing suits in living color against a beautiful lake make me think it’s pretty different.

I became a Robert Taylor fan at the age of 15 when his TV show, "The Detectives" premiered. My mother wanted to watch it because she remembered Mr. Taylor from the thirties. I took one look and that was it. I spent the rest of my high school career watching Robert Taylor movies on late night TV, buying photos of him, making scrapbooks and being a typical teenager. College, marriage and career intervened. I remember being sad when Mr. Taylor died. I mailed two huge scrapbooks to Ursula Thiess. I hope she got them. Time passed, retirement, moving to Florida. Then in 2012 my husband Fred pointed that there were two Robert Taylor movies that evening on Turner Classic Movies--"Ivanhoe" and "Quentin Durward." I watched both and it happened all over again. I started this blog both for fans and for people who didn't know about Robert Taylor. As the blog passes 200,000 views I'm delighted that so many people have come by and hope it will help preserve the legacy of this fine actor and equally good man.
View all posts by giraffe44 →
This entry was posted in Films and tagged 1930s, 1935, acting, actor, celebrities, Criterion, digital, drama, entertainment, evening clothes, gentleman, glamor, Golden Era, handsome, hollywood, Magnificent Obsession, matinee idol, movie stars, Mr. Taylor, quality, remastered. Bookmark the permalink.