Stand Up and Fight, 1939, is playing on Turner Classic Movies on Thursday, January 14 at 6 p.m. est.  Closed captioned. 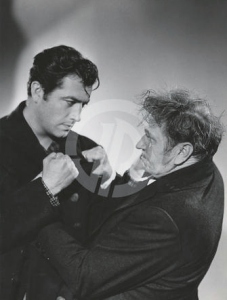 Cynical Southern gentleman Blake Cantrell (Robert Taylor) is forced to sell his plantation and seek employment with a stagecoach company run by Captain Starkey (Wallace Beery) and owned by lovely Susan (Florence Rice). But is the company actually illegally transporting slaves? And can a leopard, the cavalier Blake, actually change its spots?

I didn’t expect much from this movie, and was thoroughly and positively surprised by the sharp writing and ebullient acting, and contrary to many A-movies of its day its aim is no way an aesthetic ‘arty’ one. Made in 1939, this movie addresses all sorts of controversial issues, and they have a way of taking you by surprise along the way. The movie is really about abolitionism and treats its subject with remarkable subtlety, although why and how the lynch-mob, the one that we encounter in the last third of the film, goes after white man Starkey is never made quite clear. Cantrell’s gradual moral reform is well-explained and plausible, not least because of Taylor’s warmth and humanity in the part. Yes, he is handsome, but here it is almost besides the point. Wallace Beery has a field day with the larger-than-life captain, very cleverly balancing on the edge of buffoonery but with plenty of edge and ambiguity.

See it, it makes a deep impression.  Review by Michael Bo from Copenhagen, Denmark for the IMDb.

Candid calisthenics continue with Robert Taylor of “Stand Up and Fight” taking a stance on the baseball diamond.

I became a Robert Taylor fan at the age of 15 when his TV show, "The Detectives" premiered. My mother wanted to watch it because she remembered Mr. Taylor from the thirties. I took one look and that was it. I spent the rest of my high school career watching Robert Taylor movies on late night TV, buying photos of him, making scrapbooks and being a typical teenager. College, marriage and career intervened. I remember being sad when Mr. Taylor died. I mailed two huge scrapbooks to Ursula Thiess. I hope she got them. Time passed, retirement, moving to Florida. Then in 2012 my husband Fred pointed that there were two Robert Taylor movies that evening on Turner Classic Movies--"Ivanhoe" and "Quentin Durward." I watched both and it happened all over again. I started this blog both for fans and for people who didn't know about Robert Taylor. As the blog passes 200,000 views I'm delighted that so many people have come by and hope it will help preserve the legacy of this fine actor and equally good man.
View all posts by giraffe44 →
This entry was posted in Films and tagged 1930s, acting, actor, adventure, celebrities, Charles Bickford, drama, entertainment, Florence Rice, gentleman, glamor, Golden Era, handsome, hollywood, matinee idol, MGM, movie stars, Robert Taylor, Stand Up and Fight, TCM, Turner Classic Movies, Wallace Beery, Woody van Dyke. Bookmark the permalink.